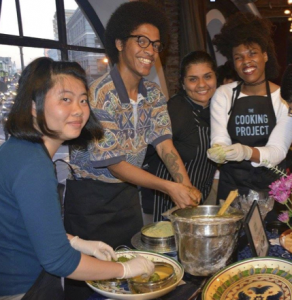 Chef Jacqueline Bruno (Jackie B) found one of her best assistants when she hired Wesley Stewart – a former student of The Cooking Project. Chef Jackie has been a successful private chef since 2004.

Chef Jackie (pictured in the middle) became a volunteer instructor for The Cooking Project because she wanted to give something back to the community. She loved the energy of The Cooking Project’s youth and their commitment to learning – not only to preparing the food, but serving it as well. Through this experience, she affirmed that most young people find a passion in good food.

Wesley (pictured on Jackie’s right) came to The Cooking Project through the Larkin Street Youth Program – a shelter for homeless youth living in San Francisco. He had ambitions of working in the culinary arts, but had never worked in the food industry before. He saw it as a great opportunity to work with professional chefs in a learning environment – a chance that many kids never get.

After working with Wesley at a Cooking Project event, Jackie approached him to see if he would help her serve at an upcoming high-end party. Jackie remembers that Wesley had a nice smile, integrity, and the eagerness to learn. “…and I knew he could hold a silver tray with lobster on it.”, she said. 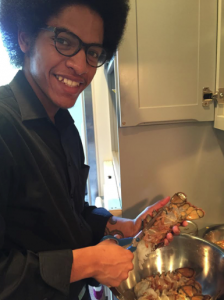 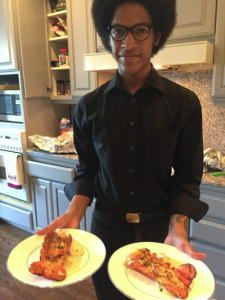 And not only hold the tray – while working with Jackie, Wesley has learned to prepare lobster ‘from tank to platter.’ Jackie acclaims, “Wesley can handle the live lobster, kill it, clean it, cook it, present it, serve it… and lobster is not easy.”

Wesley, on the other hand says, “Lobster was cool to make! And, much easier than I thought… I had to make a 10 gallon jug of sweet tea while working with Jackie in Hayward and that was honestly harder than the lobster!”  Despite challenges with sweet tea, Chef Jackie lauds, “Wesley is reliable in every aspect – Performance, Presentation, Professional Mannerisms. In high pressure situations, he reacts well.”

When speaking of his first day on the job, Wesley says, “[It] was pretty unorthodox. I was working with Jackie in someone’s home using their kitchen and their dishes. Throughout the night my brain was on information overload and I loved it. Jackie has so many neat little tricks and she is very particular about everything. Luckily I didn’t break anything or mess up real badly.”

Since then, “Jackie has taught me how to cook quickly. Every time I’ve worked with her we do things at full speed with no breaks until the very very end. It’s wild but also so much fun. She has also taught me about the pairing of flavors and how to cook with a theme. Both of these lessons I use on a daily basis since working with Jackie.”

Other lessons that Wesley has incorporated into his life are: How to cook a good egg – according to Wesley, the secret is “Low and Slow.”   With some international flair, Wesley can show off his Arancini (Italian rice balls), which is now also a favorite among his friends.

To the current youth in The Cooking Project:

Wesley advises “to always come in with a good attitude.“  Chef Jackie points out that The Cooking Project offers “so much more than just a routine – it’s not about free food, it’s about culinary experience that will help your future and your family.” Wesley has seen hard times, and empathizes: “The world is frustrating and exhausting but when you cook, you have to leave all of that negativity behind. When sour people cook, their food tastes sour. In addition, have fun! Cooking for others is such a rewarding activity. You might make 500+ arancini or dozens and dozens of steamed dumplings, but having just one person smile over your food or come up to you and say how good it was can make your entire week.”

To all of the professional Chefs:

Wesley would like you to “Remember where [you] started and recognize where [you] are now. By dedicating a few hours out of your busy schedule, you can teach someone how to feed themselves; or how to have fun; or how to be a successful chef. Those lessons can’t be learned from Youtube.”

Being a former restaurateur herself, Chef Jackie says, “We need better vocational training.”  She acknowledges that many organizations may be worried about the liability of having a student involved with their organization, but “we all need to step out and support the community because it’s the community that supports us”  She says, “Many Michellin star chefs never went to culinary school – anyway, it costs $60-90,000.  These kids could never afford that. Someone needs to give them a chance.”