Food, Family, and Ethnicity
Food and the Community

Golden Curry from the Golden Land 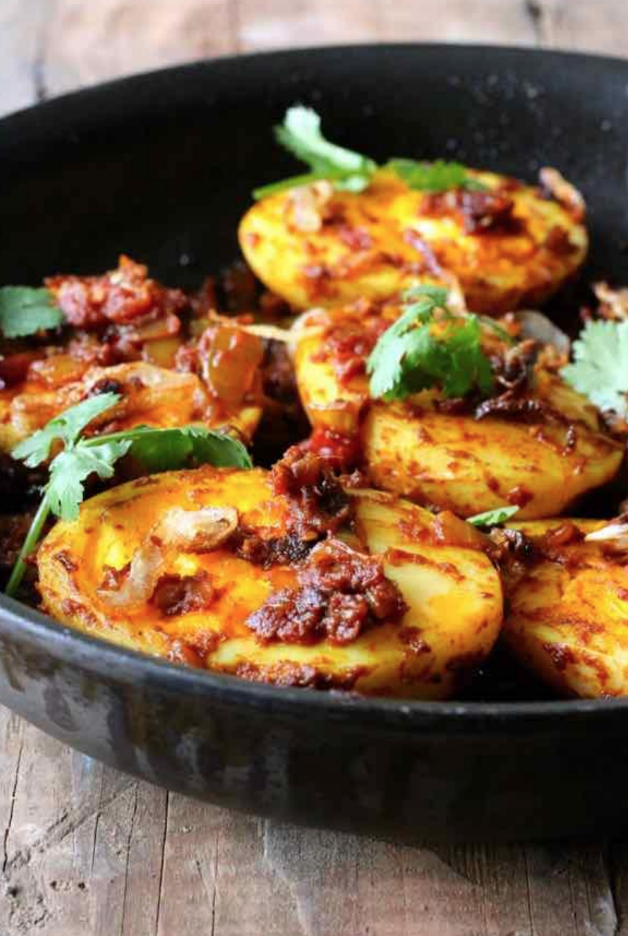 When I moved to San Francisco three years ago for college, I had a very hard time trying to adjust myself to the food in the United States. The food at the school cafeteria was subpar and it was impossible for me to eat out every day with my hundred-dollar allowance. The food in this country tasted too bland for me. I longed for the taste of high-iodine curry with a load of MSG in it. I missed my favorite vegetable dish, fried watercress, which was nowhere to be found in this country. I realized that my choice of food was my identity and I had lost my identity as a Burmese person. I was nowhere near feeling Burmese with the late-night pizzas and the spaghettis from the school cafeteria. I am what I eat, and I was not eating anything that tastes like home.

The Standard American Diet is “wholly alienated from the way we live—we typically don’t see where our food comes from—but from our own cultural histories and traditional food ways.” (Calvo & Esquibel, 2015, p. 25) I believe I have been ripped of my traditional food ways because a meal devoid of creamy curry is not a meal to me. Having lived my whole life in Myanmar and fed off a galore of exquisite oil-dripping dishes, I would rather have garlic beef curry, my least favorite Burmese dish, than to have another plate of unauthentic sushi. Reevaluating about the food I had been eating since I got here made me wonder how orgasmic it would be if I could just have a taste of my favorite Burmese dish, Golden Egg Curry. We call it Bae Oo Hin. Bae Oo means duck egg and Hin means curry in Burmese. Burmese egg curry is made with duck eggs and not chicken eggs. This curry, to me, is the Golden Curry of the Golden Land. Come to think of it, this egg curry identifies me as who I am since I have a lot of history with it.

I attended the same school from elementary till high school and it operated from 9 a.m. to 5 p.m. weekdays. On the car rides home from school, I would always look forward to the dishes my grandmother had cooked for me. The first thing I did as soon as I got back home was diving into my rice plate and eat as much as I could. Tuesdays, Wednesdays, Thursdays and Fridays were my favorite days of the week. This was because my grandmother would always cook egg curry on Tuesdays and Thursdays. On the next day, my aunt would microwave and pack me the leftovers for lunch at school. It is well known that “school cafeterias have long been the site of much talk, whether it is about the latest friendships or last night’s TV show or the quality of the food.” (Yano & Adams, 2013, p. 33) Lunch time for me and my friends was similar to a food tasting. We would brag about how good our home-cooked meals were and gathered all the dishes in the middle of the cafeteria table to have a buffet feast together. There were constant battles about whose dish tasted better, but my grandmother’s egg curry was everyone’s favorite. It always run out the first and got to a point my grandmother had to pack more eggs to make sure there was enough for all of us. It is customary in Myanmar that adults care for children and when it comes to food, they treat any children as if they were their own. 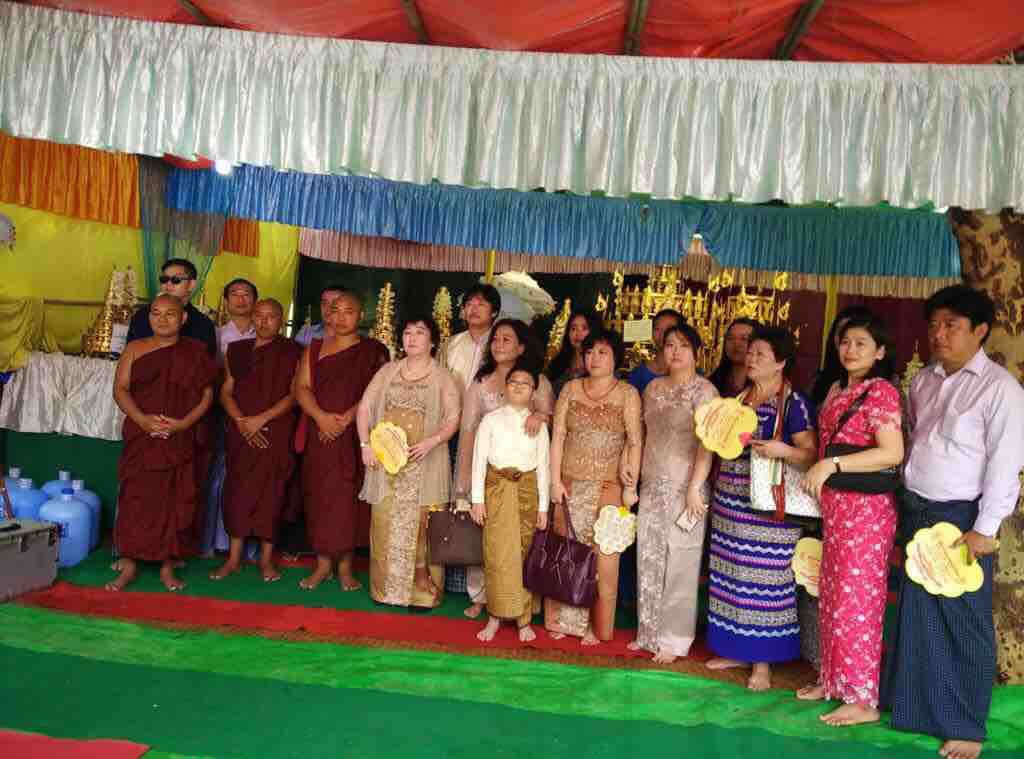 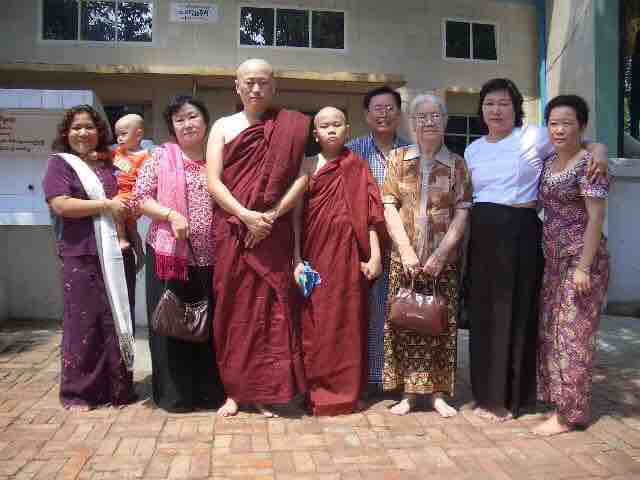 My mother sometimes made egg curry during the weekends from time to time since it was my favorite. Since my birth, she’s been diagnosed with high blood pressure and heart disease, so she rarely steps into the kitchen for health reasons. However, she still endured through the hardship just to make me my favorite dish. My mother’s egg curry tasted a little different from my grandmother’s. My mother’s curry tasted more culturally authentic since she is Burmese, whereas, my grandmother is Chinese. My grandmother’s egg curry tasted like a Burmese-Chinese fusion cuisine. This was because my grandmother fried pork to add taste and scent to the oil and used that oil to make the curry. Looking back, I am very grateful for the things my family do for me. I’d say I had a happy childhood.

Whenever my grandmother gets sick, she does not cook until she recovers. This meant no egg curry for me. During this time, my dad would take me to this little family-owned teashop, Lo Ta Ya at the corner of the street from where we lived. Lo Ta Ya means “as you wish” in Burmese and the concept of the name reflects the customer service at the tea shop. My dad is a regular there and knows the owner and the servers at the teashop. This is because the teashop is where he has ‘tea talk’ with his friends every night. It is a custom for Burmese adult men to hang out at a teashop and discuss about variety of topics ranging from current news to personal matters. My dad always takes me with him to the teashop on Friday nights and it was our bonding time. Over the years, I’ve also become very close with his friends, who I consider my uncles. Lo Ta Ya serves egg curry and it tastes the most like the egg curry that my grandmother makes. I’ve had different Burmese egg curry dishes across the city of Yangon and this teashop, a few hundred feet away from where I live, most resembles my grandmother’s egg curry.

My golden egg curry was also all that I ate during the time I was trying to lose weight. I went on a no-carb diet and this means no rice for me. I had egg curry every day for lunch and I only ate the whites and discarded the yolks. It was more effective to eat boiled eggs, but it was hard for me to eat egg and have it not been egg curry.

Freshmen year went by and I decided to live off-campus. Since the Flexi meal plan was no longer a part of my tuition fees, my parents decided to give me a little more money to spend on food. I started cooking food at home and as someone who’s never stepped a foot in the kitchen before sophomore year in college, I started with the basics such as cooking steak or baking chicken drumsticks. I became fairly good at cooking after a few months and it was when I decided to make my favorite curry myself. I called my grandmother and asked for her recipe. I even had her on FaceTime the first time I tried cooking it. I had a great time and I was happy seeing my grandmother feel content about sharing her recipe with me and witnessing me cook it for the very first time. The curry tasted very good and it was the first taste of home since I’ve gotten here. Yet, to my surprise, it was lacking something. I went over the ingredients list and my grandmother confirmed I cooked it exactly the way it was supposed to be cooked. At first, I thought it was the difference in the ingredients used since they were made here. However, I came to realize that my curry did not have the secret ingredient that my grandmother’s and my mother’s curry have. The secret ingredient my curry was missing was “the love that you put into preparing your food.” (Calvo & Esquibel, 2015, p. 39) It doesn’t matter whether “you are the cook, the gardener, or part of the clean-up crew, please know that your labor is sacred and that somewhere the ancestors are smiling, knowing that you are taking an active role in healing your friends and family,” with your food. (Calvo & Esquibel, 2015, p. 39)

Although I had my favorite curry by then, my dinner in this country still felt incomplete. This was because, for me, a dinner meant a meal with all my family members present at the dinner table having a good time eating our savory home-cooked dishes made by my beloved grandmother. I started learning to cook several Burmese dishes with the aid of online recipes. Of course, the ingredients available in the United States were different from the ingredients available back home. I believe “when immigrants adapt to their new surroundings, the most immediate way this happens is through the food they make: They look around at what’s available and try to make it into something they can recognize.” (Ho 2017) I tried the best that I could to make it taste as authentic as possible with the help of Asian ingredients I could gather from May Wah Market on Clement Street. After I’ve mastered a few Burmese dishes, I started inviting my Burmese friends over every weekend to have a home-cooked dinner together. It always is the highlight of my week. It is our identities as Burmese people to have home-cooked Burmese dishes with our loved ones at the table.

Me and my golden curry go way back to my youth and I believe why I hold this dish dearest is because it was there for me both during my hard times and my good times. It was one of the mediums that my grandmother and my mother used to express their love for me. It brought me closer to my friends at lunch. The egg curry gave me extra tea sessions than just Fridays to bond with my father who I barely met at home because he had to work from morning till late. The very same egg curry brought me extra joy when I was already having a great time at the dinner table eating together with my family. It was also what I had for lunch when I was on my no-carb diet to lose weight. Last but not least, it was the first ever Burmese dish I’ve made in this foreign country where nothing else felt like home. It had been a part of my whole journey in life and it is my experiences in my life that made me who I am today. This curry contributed to some of the small yet important experiences in my life that shaped me into who I am today. My food is my identity and my Golden Curry from the Golden Land will always be my favorite dish of all time as long as I’m still walking on the very grounds of Mother Earth.