Fried rice is something that you can make using leftover rice (or freshly made,) a couple of eggs, soy sauce, sesame oil and any vegetables that sound good.

When Leif taught this recipe in late July, he added summer corn and cherry tomatoes, along with some roasted broccoli and shiitake mushrooms. The roasted ingredients added a nice flavor and texture to the rice, but there don’t need to be any roasted vegetables; they can all be cooked in the same pan with the rice, too.

Start by cooking the rice (if not already cooked) since that will take the longest. And preheat an oven to 400. If using broccoli, cut it up, making the stem parts in smaller pieces (since that takes longer to cook) and spread out onto a baking pan. Drizzle olive oil and salt over it. Husk the corn and cut it off the cob; put that on a separate baking pan and sprinkle some salt and olive oil over that too. Put those in the oven and check every 10 minutes or so until they look golden brown and a little bit roasty on the edges, then take them out. In the meantime, chop up an onion, a couple cloves of garlic and a red jalapeno (which is a ripe version of the classic green ones! the seeds and white membrane are the spiciest parts so as much or as little as suits your taste). If using mushrooms, remove the stem from the cap and slice; just like the broccoli, the stems take longer to cook, so cut those into smaller pieces. Chop up some green onion, cilantro and basil, and set aside for the very end. Cut the tomatoes in half and set those aside too. Crack 2 or 3 eggs and scramble them in a bowl, leaving it near where you’ll be cooking. When your rice and roasted vegetables are ready, get a frying pan or wok really hot and add in some oil, enough to cover the bottom. Mix in the onion, garlic and jalapeno until they start to look cooked, add in the mushrooms to get some cooking, then add the rice, mixing in soy and sesame oil to taste. Pour in the egg and keep mixing everything together so that the egg cooks in the rice somewhat evenly throughout. Add salt, soy sauce and sesame oil to your taste.

When serving the fried rice, add the roasted vegetables on top, or mix them in with the rest. Spoon some of the green onion, cilantro, basil and tomatoes over the top and dig in! It’s nice to have sriracha and soy sauce on the table for people to add if they like too! 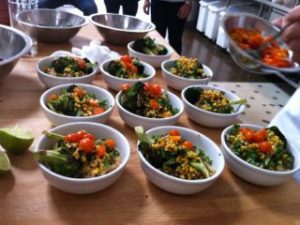